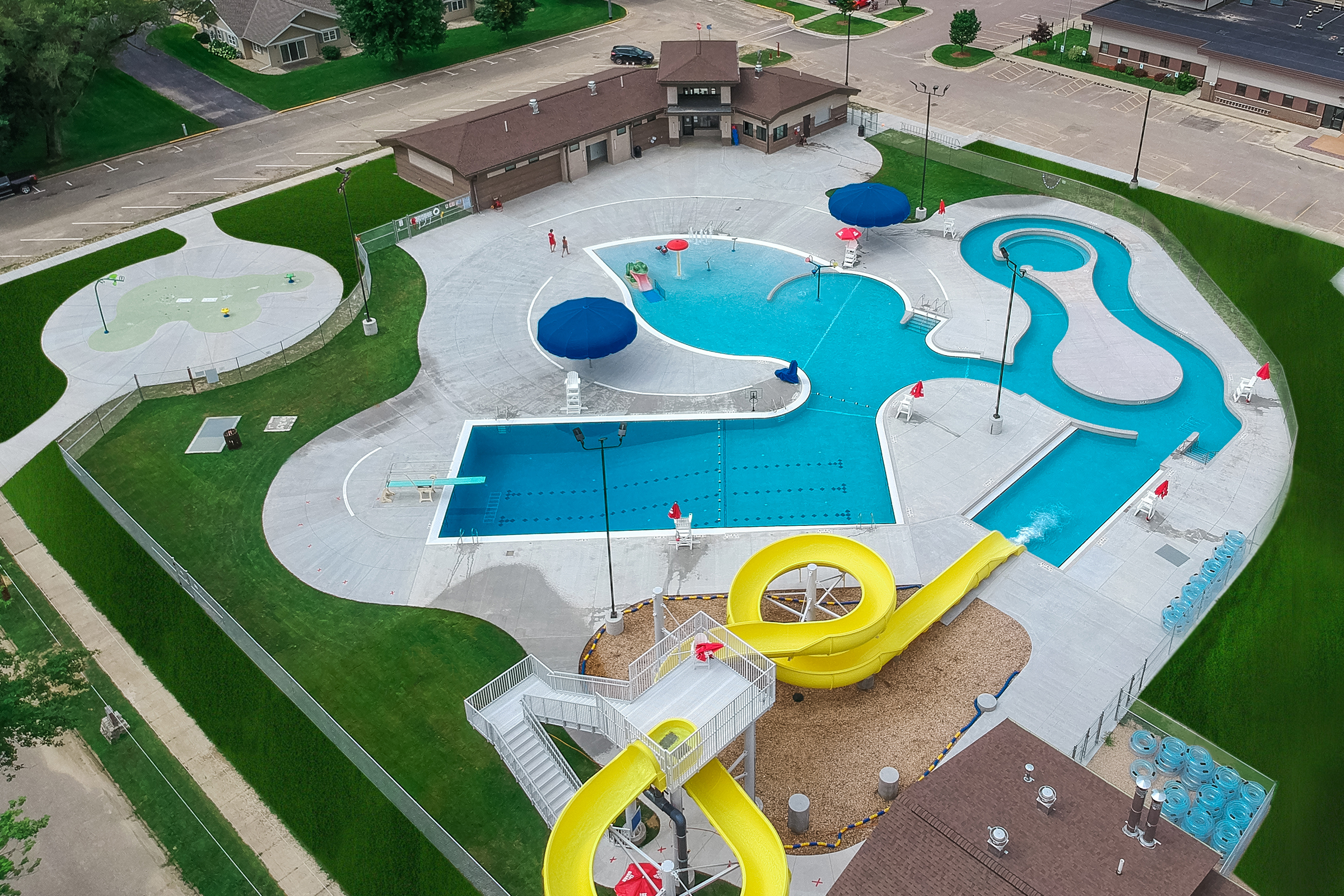 he Woodman Aquatic Center located in Richland Center, Wisconsin, is a dream come true for a community that has been working very hard for almost a decade to replace a very tired facility that served the community well for almost half a century. While real boots on the ground efforts have been driving this project forward for the last three to five years, influential community members began to launch this dream nearly ten years ago, and in spring of 2020 community members finally got to dip their toes in that dream become reality for the first time.

The existing facility was built in 1972 as what may have at the time seemed a cutting edge community pool facility. The original design included a limited function bathhouse with lockers, lap pool, diving pool and toddler pool. For years, the community enjoyed what this facility had to offer, but the buildings and pool basins began to fail several years ago, and it became apparent that the maintenance and upkeep costs were becoming a burden. City recreation managers were also becoming aware of more current trends in aquatic recreation and the desire to keep up the existing facility began to shift to a dream for a completely new type of aquatic facility.

Roughly six years ago, an ad hoc committee was formed to begin a roundtable discussion on priorities and goals, and community listening sessions were coordinated to gather community feedback. It was important to the committee that the community members were heard and that all stakeholders had input on building a consensus vision .Once the vision began to get legs, the committee engaged ADCI (Architectural Design Consultants, Inc.) out of Wisconsin Dells to design the facility. ADCI with their aquatic partner WTI (Water Technology Inc.) began to work with the committee to design as much aquatic facility as could be accomplished within the project budget. The dream was quite grand and some features prioritizing and consensus decisions had to be developed.

The facility was estimated to be $4.8 million.  The Richland Center city council agreed to fund the project as long as the committee was able to raise $2 million in donations from the community. The committee launched ahead with their first fundraising event, Trivia Night, raising approximately $13,000. A fundraising team was formed, and they began to contact local businesses, civic groups, community organizations, individuals, families and farms. Ultimately, the committee raised over $2 million through private sector donations and fundraising events.

Running parallel with fundraising efforts, the committee and design team worked to finalize the new aquatic facility design that had to fit on a very compact site and within a tight target budget. The final design includes a 4,346 sf bathhouse, 1,176 sf pumphouse, 8,673 sf of aquatic water surface area (270,778 cf of water) and 940 sf of splash pad area, all within a site of just under 2 acres. It was a priority that the design include features that could be enjoyed by all age groups within the community, as well as consider features that both provided aquatic recreation and healthy exercise activities.

The new facility better accommodates these needs for patrons of all ages and all needs, including a splash pad for toddlers through middle age and mothers of young children, zero entry pool for the elderly and those with mobility issues, lap pool for swim lessons and exercise, and a lazy river that can provide both relaxation as well as “against the current walking” exercise.

The bathhouse was designed to serve several programmatic functions, primarily acting as a control “gateway” into the facility where patrons can be greeted by staff who have full visual control of the facility from a single vantage point. The building accommodates staff break and training areas, first aid station, lockers and showering / sanitary facilities. The locker and shower facilities are family friendly with a single, split entry and single converging exit configuration. The concessions area with its multiple service windows allows for refreshment sales to both patrons within the aquatic facility bounding fence and to public patrons outside the fence frequenting the facility from adjacent local parks and the nearby bike trail.

Upon entering the aquatic site, guests are greeted by an ample deck area for lounging with full view of the facility as well as greenspace for beach towel sunbathing. From the central deck area, the primary entry into the pool is by way of a large, fan-shaped zero entry recreation pool with water toys and toddler slide. Going further, the pool deepens to mid depth and meanders through connected pool basins to the recreation area and lap pool, diving pool, slides or lazy river.

The backdrop to the aquatics layout is the large 2-story slide tower. The location was placed so that the tower and slides do not block view of any other aquatic or recreation areas for total viewing control by lifeguard staff. The tower accommodates the tube slide that splashes down to the pool basin connected to the lazy river with space to allow a future additional body slide with slide runout on deck for those patrons who are uncomfortable sliding down to a splash basin and prefer a runout termination. The slide tower also provides lifeguard staff a vantage point of the entire facility from above. The various pool basins are all centrally connected at a central hub where a lifeguard station on a central island also provides a full vantage point of the aquatic facility. Patron safety, operational costs and staffing efficiency were high priorities in the overall design.

Given that the community had so generously supported the fundraising efforts for this project, the committee wanted to provide some “appreciation” or “give back” features to the community. The splash pad was intentionally designed to be outside the general aquatic facility bounding fence, with operational controls accessible to the public, so that patrons in the community had access to some features at any time outside normal operating hours. This “free to the public” recreation area has been very well received.

The dream was, and still is, very grand. The project is not yet finished even though the initial construction has been completed, celebrated and enjoyed. There is still vision to add at least one more slide, more recreation features and additional programs. This facility has already proven to be an amazing addition to the Richland Center parks system, both aesthetically and functionally. It was designed to complement the Parks Campus by using similar design language, colors and materials. The state-of-the-art systems make the facility easier to manage while maintaining the highest levels of water quality and function for years to come. This project has definitely become a feather in the cap of Richland Center.

This article was recently published in World Waterpark Magazine. To read more, view the piece here.

Designing for Cleanability: How Interiors Are Changing Post-COVID

ADCI Celebrates 35 Years in the Industry